My Own Internal Riots 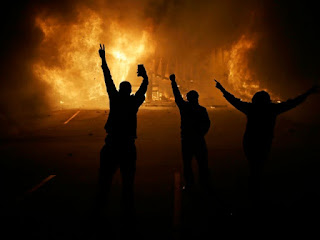 I keep telling myself to write this blog. I’m supposed to write this blog, this big brave blog that holds me accountable for my own bullshit.  But whenever I get serious about such accountability, I want to wallow in my own bullshit, I want to roll around in it and make friends with my own bullshit. Instead of writing this inspirational post where I call myself out, I just want to write bad poetry that resembles bad 90s alternative songs.  It would go something like this: You don’t know what it’s like. YOU DON’T KNOW WHAT ITS LIKE.  Or something sappy, yet smooth like, “I will not be idled with despair….”  And yet.

Self awareness is hard; it’s much easier to just wallow.  I will try my best.

Justification is a slippery slope. It doesn’t look like justification at first.  It seems accurate, it feels right, it seems like you’re owed something.  Sometime along this path I decided it was ok to be selfish.  I decided that being angry and jealous and ugly were justified. I decided that protecting my “feelings” was more important than caring for others.  I decided my lack of a baby, meant that I did not have to feel joy for my friends and family having babies. I decided it was ok to angry; to avoid loved ones because I was experiencing emotional isolation like I’ve never felt before.
My whole life, I’ve been able to relate to others, I’ve been able to share my experiences, emotions, and thoughts with just about everyone. I’ve always been open, it’s always been easy for me to make connections with people I met.  Even in my loneliest moments, I never felt alone.  Firstly, because I’ve always had a strong support system, a close knit group of friends and family.  And if that didn’t work, I had a savior who understood me, who knew what I was going through.  Not many people know what it’s like to have a mother who is diagnosed with Alzheimer’s at 52, but I had my sisters, and a dear friend who had lost both parents.  And Christ knew what it was like to be estranged from his father.

I know no one else who had longed for a baby and has failed to get pregnant.  It is something that has isolated me beyond anything else I’ve ever experienced.  So I started searching for blogs and forums thinking it would ease my pain.  Do you know what I found?  People who were echoing my pain. People who could describe the water I was in. People who said it was ok to be selfish, people who said it was ok to avoid baby showers and ask not to be part of your sister’s pregnancy. People who justified my anger, and my jealousy, and my selfishness.  So I went with it, thinking this was the salve to heal my wounds.

The reality is that I think it was keeping my wounds from scabbing over. So I picked at them, I kept them open, I became intimate with the pain and isolation.  I justified falling into the pit of despair and not even trying to find my way out.

I am lucky that I have a husband who reminds me that we are blessed, a husband that assures me that there is a plan in all of this. I don’t always want to hear this.  But, there are times I have clarity.  That I realize that it is all too easy to justify bad behavior.  The riots in Ferguson and Baltimore have bothered me, because I understood the emotions, I understood frustration and the rage, but I did not understand the actions of the people. I understood being angry and frustrated with the system, but I didn’t understand how that could justify fire and destruction and their own form of brutality. And suddenly I realized I was doing the same thing.  I was excusing my anger and jealousy.  I was refusing to be happy for those who were joyfully expanding their families.  I used my pain to justify my bad behavior; much like the rioters of Ferguson and Baltimore use their pain to justify destroying their own cities.

I don’t want to justify the destruction of my own city.  My pain does not justify the destruction of relationships.  My pain does not justify my own internal riots.  You see, these riots prevent me from turning to my Father, they prevent me from turning to truth.  Despair is addicting, and even though I know the answer, I avoid it.  The truth is, God does have a plan.  It is my faith that is weak, not His plan.  The truth is, I don’t know who this angry woman is.  I don’t recognize the woman fuming with jealousy that stares back at me from the mirror. This isn’t me.  There isn’t much room for love in the riot of anger, resentment, and envy. I want to be the girl filled with love for the humans around her again.  This does not lessen my desire to carry a child.

O God, help me to trust in Your plan. Bring me peace and joy.
Posted by Carla@3-foldcord.com at 11:21 PM