I suck *ass* at Religion! 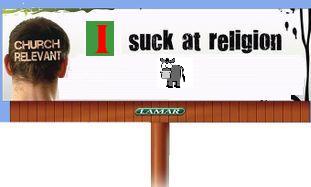 25 There is a way that seems right to a man and appears straight before him, but at the end of it is the way of death.


My track record when it comes to religion just plain sucks ass! Had I been born a couple hundred years ago I would have inevitably been burned at the stake; and if I'd managed to live and die without being caught, the church would have most likely found out where I was buried and dug up my corpse so they could beat it mercilessly. Speaking of this, years ago I watched a movie where the Catholic church actually dug up the body of some deceased heretic and passed sentence on him posthumously by beating the dust out of his fleshless bones with a whip. It was hilarious! With every strike bones were flying everywhere; people were ducking trying to avoid finger pieces, skull fragments, and hunks of rotten clothing. After the decimation, the corpse was promptly excommunicated, which I felt showed some real religious conviction. I wish I could remember the name of that flick? If you happen to know, contact me, I would love to watch it again.

When  I was 14 I was kicked out of Lutheran Confirmation class and I was told not to come back (or in the pastors words “It‘s too late for you.”). After my mom and grandma found out, they cried…They cried a lot! Although I was not upset about being booted out of this religious circle jerk, seeing your mother and grandmother crying makes you feel like a steamy pile of liquid feces with matted chucks of burnt hair in it.

Lutheran Confirmation is designed to help youth affirm their faith, however, the only affirmation I came away with was that they (the church) could all get bent. I’m not going to get into the details or the reasons for my “falling from grace”, because they made me sign a non-disclosure agreement in the settlement. I can say that the settlement involved me receiving four cases of Mogen David© wine; a very nice silver plated chalice; and a beautiful, albeit slightly used, white robe with a cross and dove on it.

It seems that man-made caveats and rules have inundated many denominations over the years. I’m curious if anyone else has butted heads with…or been thrown out on their butts by man-made religious institutions? Are their any other non-biblical church mandates that you find ridicules? If so please comment ( you can post anonymously too…There is no fear here)