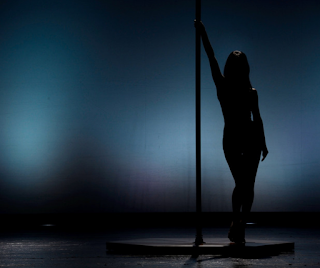 In the film, her husband mentioned she had had yet another miscarriage, just that week. Their friends had no idea. While I could somewhat sympathize with the pain they felt, I didn’t yet understand the desperation of the dance and I wasn't yet intimately acquainted with the pain. They had so many kids, how could they still be longing and trying when obviously a full-term pregnancy wasn’t in the cards for them.

I get it now. A bit too well. I am so glad that 2010 Carla didn’t utter those words out loud to anyone.

I understand Munch's dance now in ways I wish I didn't. I am not saying I’m going to jump up on a pole to dance at strip club anytime soon.

But I understand Munch's need to express her grief, to let out the anguish she can't usually show. I understand how happy she is for her friend's pregnancy and the overwhelming grief she has for her own. I understand the tension and anxiety she hides from her friends.  I have hobbies now that I didn’t have back  when I didn't know all these things. They are filling a space that has yet to be filled with pregnancy, babies, and motherhood. I know many people don’t get the things I’m interested in 2022.  I don’t completely understand them either.

But I do understand Munch's pain. The constant longing. The hoping for something that isn’t logically in the cards. The blame she puts on herself for making plans for a family she thought would be so easy. I understand the desperate desire to be seen as a woman, even though my woman’s body won’t do the things it was meant to do, even though our society doesn’t see me as a complete woman because I haven’t attained true motherhood. I want to be seen as a complete, functioning, whole, sexual woman. I want to bee seen as a woman who can accomplish my so-called God-given female capability. Perhaps I want you to see me that way, because I no longer see myself that way.

I understand Munch's loss and the ensuing grief, though we’ve only experienced one miscarriage, and not the five Munch  had. I’ve yet to know the hope of 2 lines post loss. What I thought was a very painful beginning, a promise of more to come, has just become a very confused, excruciating middle. One that many people in my life are probably learning about for the first time here. I didn’t tell many people about my miscarriage, just like Munch didn’t tell her dear college friend about hers.

No, I’m not going to dance on a pole. But I am walking around in the world like I’m a whole person not aching each minute for something more. I’m known to most as a normal adult, a professional, who might talk a little too much and make dark jokes- but someone like the rest of you. But I don’t feel like the rest of you. I feel like an anomaly. And I can see that you notice the difference, but you don’t know that those differences come with an unspoken price. And sometimes, when I can’t shake the melancholy of childlessness by moving forward with my normal life, I just want to climb up on that pole and show the world the bereaved mother hiding under the surface.

But I know you won’t get it.