Grasping at the Straws of Christian Persecution

I know, I know, I have the tendency to lay on the sass. But sometimes sass is needed. And I am just so exhausted by the claims that American Christians are persecuted.

I mean, seriously. Does anyone spouting this stuff actually believe the crap coming out of their mouths? 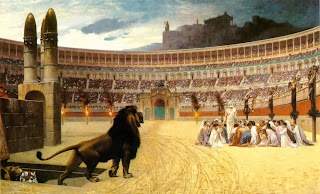 Do you really think that in the United States of America that the followers of the #1 religion are persecuted? Are you so pompous and arrogant to think that as a wealthy, middle aged white male in the most powerful country in the world you can claim to be persecuted and not get laughed at? The black boy who goes to prison for being at the same party that the white kids are at surely has more of an ability to cry persecution than you.  Hell, the white housewife has more truth behind a cry of persecution than you do. Do not tell me that your Christianity is persecuted and you are crushed under the weight of your cross.  Can you worship at the church of your choice, and worship freely? Can you own and read your Bible? Can you publicly claim to follow Jesus without your life, family, or job being threatened? Please before you claim persecution talk to a Christian in Iran, or how about a woman in Iran? Talk to Christians of Pakistan or even the Catholic Church in China. Talk to a Sudanese refugee, I can refer you to a number of them down the street from here. Get over yourself. You are doing nothing for Christendom by pretending you are persecuted in the US of A for your religious beliefs. Do not compare the Affordable Care Act or Real Time with Bill Mahr or even the corporate whore Planned Parenthood to living in the Roman Empire as a Christian. When you are having secret meetings in your house to conduct communion or watching your wife get raped for claiming Christ as her savior then come talk to me about persecution.  And despite all of your fear (and, sir, what does the Bible say about fear?) you, as an American Christian, are nowhere near that reality. Bible burnings and sermon banning is not right around the corner. Not everyone agrees with us, yes. Our moral code based on our religious and spiritual beliefs is not being passed as law. That does not mean we have fallen under religious persecution. We are still allowed to stand up for our beliefs and oppose any hindrances to practicing our faith. We are not being beaten, much less fired for being Christians. Our churches are still standing without barricaded doors, preachers are still on the radio and television, and we if choose, we can pray anywhere we want. So please, stop taking the power out of that word by proclaiming you are persecuted. You are simply stripping those who are truly persecuted around the world from the attention and aid that they actually need.

So tell me, have you ever truly been a victim of persecution?
Posted by Carla@3-foldcord.com at 11:30 PM