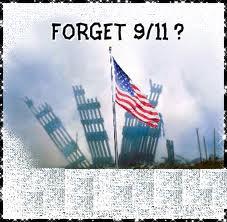 I know today is not Sunday, and there is a reason for that. There are things I like to let pass before I open up a can worms. But today is Monday, and I am opening the can up!

If I had lost a loved one tragically 10 years ago and I was still actively mourning and commemorating his or her day of death with emotional displays and expensive rituals most people would either be annoyed with my inability to move on or concerned about me. People would urge me to move on and to heal and not to stew in grief for 10 years or more. People who cared for me would want me to find new meaning and purpose in life and would want to see me healthy and happy.

And yet as a country, the United States seems hell bent on never forgetting. Never healing. Never moving on. Our country clings to our grief and tragedy like a badge of honor. Though our physical wounds have healed we choose to limp weakly forward with phantom injuries that we can’t get our mind around, that we are unwilling to deal with. 9/11 has become a new emotionally charged vocabulary word instead of just a day on the calendar.

So after the endless emotionally driven television specials have ended, after the memorials are finished and the giant flags are wrapped up and Colbie Calliat has stopped singing her inane version of the National Anthem I have some questions for you.

First, rebuilding finally began in 2011. What took so long? And is it really practical, economical, psychologically healthy to rebuild with memorials? I’ve always thought that rebuilding should have begun as soon as possible with similar structures to the twin towers with similar practical use. I thought this was the most healthy thing to do, the best way to heal, the best way to “beat” the terrorists. What are you thoughts on this?

Secondly, don’t all these memorials and edifices and TV specials seem a little bit like idolatry to you? They do to me. What exactly are we worshiping here? Lives lost? A corrupt but democratic government? An ideology that we are the best country and even bombing us can’t bring us down? It seems to me the United States is worshiping and promoting the same thing she’s always adored. Top dollar. All these promotions are making someone money. Emotionally driven marketing has proven to be very effective indeed. No other religion was even allowed at the memorial (only the church of Top Dollar and Politics). As Christians, shouldn’t our focus be more on prayer, on growing closer to Christ, and doing God’s will in this broken world? Instead of prolonging everyone’s suffering?

I have to say it, and I’m sure you won’t like it. But the USA lost less than 3000 people that day. Countries around the world have suffered and are suffering greater losses without all the pomp and circumstance, without the self centered broadcasting of their pain. Perhaps we should take a note from some of these countries. Those that lost friends and family are the one’s who’s lives changed that day, but someone like me, really wasn’t affected (accept for when I travel). There is no televised memorial for the almost 1 million lost in Rwanda only 17 years ago; little continues to be done to prevent the loss of life in Darfur; not to mention the at least ten times more Iraqi civilians that have been killed in the war that we started to avenge 9/11. Yes, even the loss of one life is tragic, but isn’t it a little selfish to think that the loss of American lives is more tragic than any other?

So there you go, I’ve opened the can of worms. I know I’ve made some of you squirm, now it’s your turn. Comment freely.