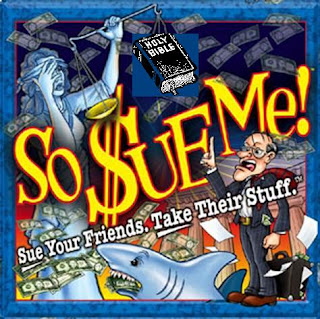 After I became a Christian I learned that my obsession with suing people really had to come to an end. Previously, I was engaged in  bitter legal proceedings against my parents for having me circumcised as an infant. I mean who were they to deny me my bodily rights over the sacred gland-cover? But God showed me the error of my ways and I immediately dropped the lawsuit, even though lost my non-refundable retainer and a corpus delicti slam-dunk. However, to reward my obedience, God provided holy healing to the intense phantom foreskin pains I had been experiencing my entire life (which was totally awesome!)


This was not the end though!

My resolve was soon tested six months later when I had the misfortune of visiting Kigongo’s Coffee and Mojo Hut: for it was on that infamous Tuesday morning the owner and proprietor, Kigongo, handed me a steaming hot cup of coffee with a faulty lid- which jettisoned off during the transfer spilling the molten contents onto my muscular chest, ripped quads and sensitive genitalia. Even though Kigongo could have been Idi Amin’s doppelganger, I resisted the urge to phone my lawyer. Thank you Jesus!

I know you might be asking yourself how one who has suffered so much finds respite in the midst of such pain? My answer would simply be God’s mercy and God’s Word ( 1 Corinthians 6:1–8...you can look it up.) You might also be asking yourself why all the potential lawsuits I mentioned above involve my private parts? To this I must refer you to 2nd Corinthians 12:7 where Paul talks about his “thorn in the flesh”.

I would also like to add that by the grace of God I recently resisted the urge to sue! Last month, against my will, I was photographed with a guy who was a certifiable douche bag. Had I sued, the basis of the suit would have been defamation of my stellar character (which despite this event still remains intact). Praise God for his Mercy!

In closing I would like to ask our wonderful readers how they feel about lawsuits: Have you ever sued anyone? Have you ever been sued? Have you ever had hot coffee spilled on your crotch?
Posted by Mark@3-fold Cord.com at 2:01 AM