I believe that way too much lip service has been given to prayer. As a matter of fact, I really have no desire to have a lot of people “praying for me”. Why you ask? Well, because these prayers don’t work! In fact, what many consider praying- will probably do more harm than good. I know this sounds a bit harsh, but believe it or not, there is a method behind my anti-prayer madness.

With the advent and popularity of the internet, especially social media, we have a much larger vein from which to extract, and be exposed to, the bloody woes of other people's lives. Thus, even with my modest friends list on Facebook, I’m often made aware of the pains and struggles that others are going through. So whether its someone with gout, or someone having trouble with their 1978 Chevy truck not starting, I get the latest up to the minute status updates. Now you might think I’m complaining about people sharing way too much about their lives on the internet…but that is only part of it; for I also want to take issue with those wannabe “prayer warriors” out there too.

The sad truth is, instead of praying, most people prefer to graze on the fodder of gossip. For example, when you put up a comment on Facebook about you or a loved one being sick, you can almost guarantee that you will get several “I’m praying for you comments”. However, their version of “praying for you”- most likely consists of this person telling eight or nine other people, who may or may not know you, about how dire your situation is. So basically what they have done is agree, amongst each other, that you and/or your loved one are probably screwed. A person would be better off sending prayer requests to Robert Tilton than being on the receiving end of these pathetic petitions.

I wish to make clear that I’m not belittling the power of prayer. So if you’re a Born again Bible Believing Christian, who knows how prayer works, this post is not about you. However, what I am belittling are the purveyors of symbolism over substance: those who love doling out their pseudo-prayers in the form of “I’m praying for you” comments.  So if you are the type of person that thinks gossip, or feeling bad for someone equates to prayer,  keep your comments under your pointy hat, and perhaps take up reading tea leaves instead.

In my next post I will address what hinders/keeps prayers from working. I will also be reviewing the power, and effectiveness of Don Stewart’s Green Prosperity Prayer Handkerchief, which I have on order (pictured below). I have heard that this handkerchief is not only extremely absorbent, but it also possesses the smell and magic of a box of Lucky Charms! We shall see:-> 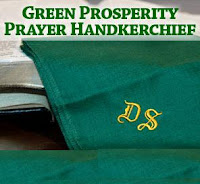