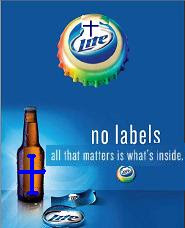 You know those ex-Catholics who now belong to a nondenominational church and love to bash the Catholic Church for all its notorious downfalls? Yea, I’m not one of them. I can’t tell you how many times I’ve been chatting with a Christian and they find out I used to be Catholic and they want to engage in a trash talking session like we just found out we share the same creepy ex-boyfriend. I’ve even heard some ex-Catholics vehemently claim the antichrist will rise out of the Catholic Church. I’m not even comfortable with the phrase “used to be Catholic,” usually I simply say I was raised Catholic. I have fond memories of this time of my life. I was saved (accepted Christ as my Lord and Savior, for all my Catholic friends reading this) through the Catholic Church. If it weren’t for the influence Catholicism had on my life I wouldn’t have the faith I have today. I have many friends and relatives whom I love, respect, and admire who are faithful Catholics. So the memories of Catholicism don’t leave a bad taste in my mouth like the memories of certain ex-boyfriends.
The reasons why I “left” the Catholic Church are as complex and varied as the Catholic faith itself. And I still don’t feel like I’ve completely left the church, you see we are still on speaking terms. I admit, to the shock of many Christians, that I still dabble, I’m like the lite version of Catholic. Today is Ash Wednesday and I plan on attending Mass and getting the cultic sign of ash on my forehead (I’m joking, I don’t think it’s cultic). I’ve given up something for Lent and the Tridium before Easter are still some of my favorite services. But to summarize why I don’t technically belong to the Catholic Church is a combination of be being fully convinced that the Bible is the true Word of God and wanting to fully cleave to my then-fiancée, which required deciding on church to attend together after we married. And I give my husband tons of credit, not being Catholic, and having had a stereotyped idea of what Mass was about, he faithfully attended Mass with me for about a year. We also attended other churches and helped lead a nondenominational Bible study. In the end, Catholicism just didn’t fit us as a couple. This was a painful realization for me and I clung to my Catholic roots. So much so, that at one point I considered attending early Mass every Sunday and a late church service with my husband directly after. Not much of a day of rest, huh? But I was kidding myself, and I soon realized that any label a church or person carried had nothing to do with their (or my) relationship with Christ. Regardless of which church I attend on Sundays, my beliefs don’t change and my desire to be close to Christ doesn’t change. My desire to stay Catholic was based on worldly ideas and had nothing to do with Jesus.

Having become more Bible literate over the years I’ve come to realize that some Catholic doctrines are simply not scripturally based. That being said, I’m not still not willing to bad mouth Catholicism- have a spirited discussion, yes, but lambaste the entire religion, no. While some of those hokey Catholic ideologies are clearly the consequence of men making decisions instead of turning to God there are still many things that Catholics get right. For instance, if you are Catholic you have learned a certain amount of reverence for the Lord in worship. While I understand the concept of the nondenominational anything goes worship, I am taken aback by coffee drinking in the sanctuary and gum chomping during services. Yes, worshiping the Lord should not be restrictive and the Catholic church has a long history of getting its papal panties in a twist over the slightest irreverencies but at the same time we’ve forgotten that the Bible calls us to revere the Lord. I’ve been in churches that seem to be terrified of silence. If there is the tiniest amount of quiet you bet someone will fill it with speaking in tongues or an enthusiastic Amen or Praise the Lord! But sometimes we are called to be quiet with God and listen to HIM, not ourselves and our own ideas.

Also, the Eucharist was to meant to be a powerful experience and the Catholic church understands this. I think in an attempt to distance themselves from the Catholic Church other churches regard the Eucharist as silliness and perceived cannibalism. But in no Gospel account of the Last Supper did Jesus say “Take and eat, this is a symbol of My body.” I understand that Christ spoke in parables and metaphors a lot, but He wasn’t doing that here. The transubstantiation of the bread becoming Christ’s flesh is a miraculous event that happens everyday worldwide. The Eucharist is Christ’s gift to us, and a physical unification of us with Christ. We are espoused to Him, afterall. This was the hardest part of leaving Catholicism for me; leaving behind the Eucharist. But just like the Bible doesn’t say the bread and wine are symbols it also doesn’t say some unmarried dude who has taken vows is the only one who can consecrate Communion. (By the way ever notice Communion sounds a lot like co-union, as in our flesh and Christ’s flesh united?) The miracle of transubstantiation happens by the power of God and because of our faith. Therefore I’ve taken communion that my husband and I have prayed over for a couple days, and I know that I am receiving Christ’s body and blood. (I know I’ve lost a lot of you here, feel free to debate this with me in the comments section.)

There are some things that Catholics just get, and I find them funny in comparison to the things that they don’t get. Like the fact that the Catholic church refuses to admit that Jesus had brothers and sisters because they attain that Mary, even after being married to Joseph, remained a virgin. I find this hilarious for a few reasons. One, because the Catholic Church doesn’t recognize an unconsummated marriage as a true marriage and it is grounds for an annulment (also, not biblical). Therefore, in the eyes of the Church Mary and Joseph were technically never married. And not only does scripture point to Mary’s other children numerous times I find it funny that Catholics readily admit that Jesus drank wine, and enjoyed it and we can do that same, but refuse to accept that Mary had sex, and enjoyed it. While non-Catholics will debate that Jesus drank grape juice and therefore our lips should never touch the fermented stuff, but agree that a sexual marriage, like Mary and Joseph’s, is healthy. This is why, folks I don’t like labels, and I always go to the Bible to back up my beliefs. But this blog isn’t about the pitfalls of the Catholic Church’s doctrine, or any doctrine for that matter.

I’ve always liked the idea of nondenominational organizations, even when I was attending Catholic Church (when I was still the full-bodied Catholic). I always thought nondenominational meant that people put their doctrinal differences aside and united on the grounds of Christ’s salvation. However, these days, nondenominational means, hey we’re not Catholic or Lutheran or Methodists of Baptists, God forbid. I understand churches, regardless of denomination, or a lack thereof need to have a statement of faith that they stand by. But we shouldn’t label ourselves something just to distance ourselves from others. I’ve been to a church that called any mainstream denomination dead churches. This is simply not true. Believe it or not, I’ve seen movements of the Holy Spirit during Catholic Mass. Some people’s faith may be dead but these churches are not. The crux of the matter is that even if we believe different things about Communion, baptism, the Holy Spirit, or how to worship, these things should not divide us. We should unite on the basis that we have been saved from eternal death by Christ’s salvation. I’ve seen some Christians refuse to support a local homeless ministry because it’s run by Lutherans, and “their faith wasn’t right”. Christ came to unify us, not to divide us. And we certainly aren’t going to bring about His will in this world if we feel the need to separate ourselves from others based on their doctrine. There is nothing wrong with discussing issues we disagree in, but they should not ultimately divide us. If our differences blind others from Christ’s love then there is a major problem in how we conduct ourselves. I also don’t think the answer to all the problems in the world comes in the form of the collapse of denominations. We can all worship in different buildings with different rituals and traditions, but we are all serving the same Lord and we can and should serve Him together.
Posted by Carla@3-foldcord.com at 8:23 PM