GUILT: Its what's for dinner!! 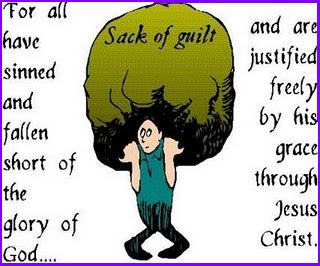 Have you ever been out of town on a Sunday, or you just shut off your alarm clock and slept through church? Or maybe you even went and visited a different church. But somewhere between Sunday evening and Monday morning you receive a facebook message, and/or a text, and/or an email, and/or a phone call that basically says, “We missed you on Sunday.” Now even if this is a single person sending you this message they will most likely say “we” because they mean the entire church. At first you really think that you were truly missed. But then you realize when you miss a Wednesday night service or the alternative Halloween event you also receive these messages. We missed you. This is less of an affectionate longing for you and more a reminder of your sinful, heathen ways and how quickly you will turn back into a pumpkin if you miss a service/church event. So stop skipping, or God will hate you.

It seems to me, that as much as we all like to believe we are modern Christians, guilt is still very much in style. It’s kind of like greed in the secular world. Gordon Gekko said Greed is good. I’m just waiting for some church tyrant who heads the membership committee to stand up in church on Sunday and say, “Guilt is good.” Paul said there is no condemnation in Christ Jesus, but there seems to be plenty of it in His churches. I grew up Catholic and under the guidance of very loving, if not old-fashioned parents, so I’ve always had a lot of a guilt in my life. Most of the time, I guilt myself into feeling bad about things, but that has to start somewhere. I think there are many of us guilt-sensitive folks out there, and these tyrants know it. All they have to do is plant a small hint that we’ve done something wrong and suddenly it has sprouted into a tremendous weight of bad feelings and obligation. I’m slowly learning how to weed these things out and prevent them from taking root in my heart, but I’ve had to learn to identify these seemingly innocent comments as what they are and ignore them.

If someone is pointing out that they realized they knew you weren’t in church on Sunday, they had to be there to know it. What they are really doing is exclaiming to all who can hear or read on facebook, that they, themselves, were in church, pretty tricky, huh? So most likely these people are trying to make you feel bad, to make themselves feel better. Its the same reason you were bullied as a kid, and its the same the reason your sister told you your new jeans made your butt look big. We really haven’t grown up. We are insecure about our own holiness and the only way to divert our guilt-ridden minds from our own shortcomings is to guilt someone else.

Now, I will admit, that there is a time and place for guilt. After all, the guilt that I experienced growing up did serve to keep me 89% pure while I was in college. That, and the three abstinence pledge cards I signed while in high school. I went to a very liberal, sexually free college. In the first week I was there I had been given goody bags full of condoms, lube, and other items I didn’t recognize. I took one home to show my mother, she wasn’t amused. The other bag I used to make condom balloons and throw at other freshman girls who squealed in the halls. But I digress. I think we know that telling teens and young adults about STDs and unwanted pregnancies doesn’t work. We’ve also found that staying pure for your future husband isn’t always the best route either. But I had made a promise to God that I wouldn’t have sex and when you are insecure and 20 and the cute guy from chemistry class is kissing you and putting his hand up your shirt at this week’s frat party, what do you think will stop you? A husband you’ve never met? The threat of disease? Or that fact that suddenly you realize you are breaking a promise to God and you feel really guilty about that? In my case, the last one worked. But there were plenty of kids I went to Catholic school with who evidently weren’t swayed by guilt- or they were so sick of feeling guilty that they completely shut off any voice of reason (whether that be God’s or our conscience). And if I had felt a little less guilt and a little more love, would I have even found myself in that predicament 11% of the time? It was usually a gruesome cycle. You feel bad about something and instead of forgiving yourself you make a bad decision, and then you feel guilty about that, which leads to bad feelings and more bad decisions. Or it goes something like this. You missed Wednesday night service and you got a text message that made you feel guilty, and you feel bad all week so on Sunday morning you shut off your alarm so you don’t have to face the guilt ridden sneers of fellow church goers, then you feel guilty about missing church on Sunday and you can’t decide whether you can face the music next week.

So I guess I’m saying that guilt is not the correct route to holiness. Not for the person being guilted and not for the one laying it on (except of course in the realm of abstinence pledge cards, where guilt is always good.) But in this era of “easy-beliefism” when are we holding other’s accountable and when are we giving them a dose of guilt? Can guilt be productive? How is guilt used in your church? And if someone is laying on an unneeded dose of guilt how do we respond without being snarky? Or is it ok to be snarky? And how do we keep guilt from weighing us down and leading us deeper into self-loathing? I think I had a point when I initially started this post, but now I just have a lot of questions. I look forward to your responses!