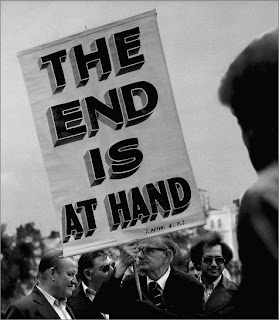 In today’s economic environment and amidst all the ensuing natural disasters pastors can’t seem to resist end of times sermons. Then there are your church elders, radio personalities, and old hymn singers who keep talking about how excited they are to get to heaven, how they can’t way for Jesus to take them home. Quite frankly, I’m sick of hearing about the golden streets of heaven and the four horsemen. Does this make me a bad Christian? Perhaps. But I’m willing to face ostracism from fellow Christians and air out my annoyance on the World Wide Web.

I do not claim to be an expert in eschatology, I mean I just learned what the word means in the last three years. The truth is I’ve always shied away from this type of thing. I didn’t really want to know what God’s final wrath would be on this sinful creation, it’s scary dude. I also didn’t want to think about being raptured up and leaving behind loved ones in a creepy Tommy Knockers scenario, I mean, wouldn’t I miss them? Truth to be told I was such an end times avoider that I only read Revelation for the first (and second and third times) in the last 6-8 months. But I finally sucked it up, read Revelations (and tried to get over my Catholic upbringing that stated this has already happened) and looked into what Jesus and Isaiah said on the matter. So I claim to know the basics, and I understand why so many are jumping to conclusions.

Signs of the Times

If you haven’t noticed there have been A LOT of earthquakes in the last six years. I will even go out on a limb and admit that they have occurred in countries with predominantly non-Christian populations. But when I heard about the earthquake last week in Japan the first prayer I said was, “Give us more time, Lord, we have more work to do. There are more souls You long to save, give us more time!” And then I prayed for those suffering and dying in the horrific aftermath. But I know there were more than a few Christians who were saying, “Praise God, Jesus is coming soon to take me home!”

I am so grateful that Jesus died on the cross so save me from my sinful ways and grant me eternal life. I thank Him everyday for His work on the cross. That being said, I’m not ready to cash in on the gift of eternal life just yet. Seriously, I’m not even 30. But I have to wonder about those who seem so eager to float up to the pearly gates in the clouds (how many more over used images can I fit into that sentence?). I feel as a blood bought child of the Living God that I have a distinct call on my life, that I am here for reason and Jesus has a will for me to fulfill. I was under the impression that most Christians had some kind of call on their lives. But if that’s so and you aren’t 98 years old, why in the world would you be willing to leave this earth before you’ve fulfilled Christ’s will? It just seems like an easy out to me. I long to serve Christ and praise Him for what He’s done for me, but I do not join in those worship songs that talk about just getting through this life until I’m with Him forever. I don’t think I’m here to just get through, I’m here for something greater.

Jesus told us that not even He knows when He will be coming again, all He said was that it would be soon. That was about 2000 years ago. Soon defined by God is a little different than soon defined by me. But I think perhaps that God has tarried so long because the prayers of the righteous asking for more time, for more souls, have held the inevitable end back.

Confess your faults one to another, and pray one for another, that ye may be healed. The effectual fervent prayer of a righteous man availeth much. James 5:16 New King James

When He comes to be glorified in His saints [on that day He will be made more glorious in His consecrated people], and [He will] be marveled at and admired [in His glory reflected] in all who have believed [who have adhered to, trusted in, and relied on Him], because our witnessing among you was confidently accepted and believed [and confirmed in your lives]. 2Thessalonians 10-11 Amplified


Jesus didn’t tell us and didn’t know the time of His Second Coming because we are not supposed to focus on that. Our focus as Christians should always be our relationship with Jesus, and no one likes to be nagged about when they are going to show up to the party. We should always put Christ first and chill out about wars and the rumors of wars, and the earth quaking, and the fall of Babylon. The Bible says we should recognize the signs but it doesn’t say we should obsess about them. I will admit that there are definitely signs pointing to Christ’s return. But don’t you think people thought that during The Plague, or how about after WWI and during The Great Depression. The signs have been around for while, but so have the prayers of God’s servants. So while we thank Christ for the gift of Heaven we should also thank Him for the purpose He’s given us and ask Him for godly wisdom.

In closing I once again quote Oswald Chambers, “The attitude of the Christian is not ‘I’m a but a stranger here, heaven is my home,’ but rather ‘I’m not a stranger here.’ A stranger is exonerated from many things for which God holds us responsible. Jesus asked His Father to treat His disciples not as strangers abut as inmates of the world and to keep them from the evil (John 17:13). We have to live in the heavenly places while here on earth.”
Posted by Carla@3-foldcord.com at 6:30 PM