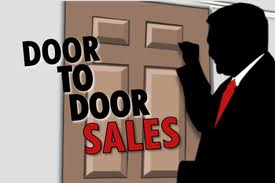 Recently we have had two instances of people trying to sell us something door to door. The first instance was a high school kid trying to sell us magazines for an upcoming senior trip. His sales pitch consisted of evoking Dale Carnegie interlaced with some slapstick comedy- ala Keystone Cops. The poor kid was unfortunate looking, not to mention he had a hideous grill which made me want to ask where he lived so I could go kick the crap out his parents! In order to put an end to his dancing and verbal theatrics, I took pity on the poor lad and purchased a wine aficionado magazine (that I still have not received!)

The second instance involved a salesman from a local lawn care company that promised he could make my lawn look “richer and fuller” in just two visits. I told him that the only thing I was interested in was a lawn treatment that could put my grass into some sort of cryostasis so that I would not have to mow it ever again. He looked at me like I was crazy, handed me a promotional flyer and went on his merry way. I’m pretty sure I heard him rip a huge fart as he descended my front steps. I guess that was his version of shaking the dust off his sandals (Matthew 10:14).

Recently I read somewhere that door to door sales is experiencing a massive resurgence. Now this is mainly due to legislation restricting telemarketers and better spam filters thwarting a majority of mass email campaigns. Nevertheless this got me thinking about churches that promote door to door evangelism/selling Jesus in response to the Great Commission. Is selling Jesus door to door an effective means of promoting the Gospel…or is this just another form of religious narcissism that makes Christians believe they are doing something for the kingdom of God?

Ding Dong…Open your door and “Reach out Touch Faith”!