Schism Sunday Vol. VII: American Identity---> Who are We? Who are You? 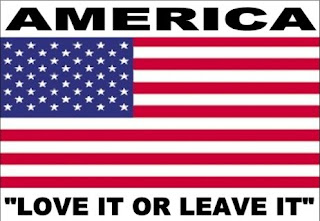 Every powerful resolute society has created its own calendar according to its own values. For many years Western civilization has utilized the Julian and Gregorian calendars which are largely based on the Roman Empire’s traditions (“August” referring to Augustus Caesar, and January referring to the god Janus, etc.) The United States’ civil religion uses this calendar mixing in its own set of holy days, such as the date of its inception (July 4) and its remembrances of human sacrifice (Memorial Day and Veterans Day). 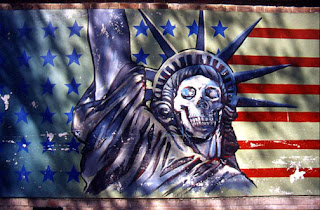 Growing up I truly believed that the divine Hand of God was on America. I espoused a form of Manifest Destiny and held the patriotic belief that I would support my country right or wrong. “Love it or leave it Man!…Love it or leave it!!”

1. Do you think the United States is a Christian Nation?
2. Do you believe every war the USA has fought or is fighting is a war for freedom?
3. Is every US soldier a hero…or is he/she just another person being paid to do a dangerous job?
4. Do you think uber-patriotism is a form of idol worship?
5. Could you actively fight, and kill people in a war you knew was wrong?
6. As Christians should we really be celebrating the festivals of the Caesars, war heroes, and presidents…or should we focus on more of biblical narrative?
Posted by Mark@3-fold Cord.com at 12:35 PM