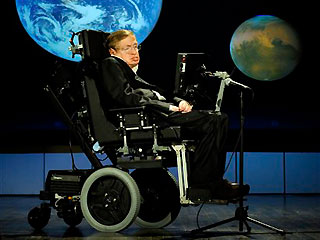 In Stephen Hawking’s  new book entitled The Grand Design, the professor makes a few “grand” statements that should make people stand up and take notice. The first thing professor Hawking states is: “God was not needed to create the universe”; or simply- God did not create the universe. The physicist also goes on to say that philosophy is dead because it has not kept up with the changing times, therefore it is the sole responsibility of science to be the “torch-bearer” for change and enlightenment. Now I’m curious if Professor Hawking realizes that his above statements are merely philosophical statements? Meaning that his statements above have no scientific backing to prove his claims. Being that you cannot prove or disprove a universal negative or positive, ultimately shows that  Hawking’s hubris knows no limits. It also shows that Mr. Hawking ’s argument starts falling apart from the get-go. The real problem occurs when people assume that when scientists make statements, that automatically-their statements are “scientific facts”.  However, nothing could be further from the truth.

There is no doubt whatsoever that Professor Hawking is a brilliant man. Even after being diagnosed with  amyotrophic lateral sclerosis (ALS) Mr. Hawking still managed to hold the prestigious  Lucasian Chair of Mathematics at Cambridge, once held by Sir Isaac Newton. Mr. Hawking’s book A brief History of Time has been called by many, “The best book that has never been read.” Meaning, if the first three pages did not put you to sleep, the rest would probably do you in! I remember reading the book as a teenager and it proved to be a real mind-scrambler. I believe that it is possible for a person to be educated beyond his/her intellect…And when people, like Mr. Hawking, start believing their own hype…they ultimately want to usurp the true Godhead...or at least try to tear it down.

Mr. Hawking- I know who lit the blue touch paper…and it was not your M-Theory.

So has anyone read Mr. Hawking's latest book? If so, what did you think of it?
Posted by Mark@3-fold Cord.com at 4:28 PM