Why I believe Evolution is a Fact

ev·o·lu·tion/
Noun:    The process by which different kinds of living organisms are thought to have developed and diversified from earlier forms during the...
The gradual development of something, esp. from a simple to a more complex form.

This blog was inspired by an atheist friend of mine who wrote a post about how he has now come to believe in Creation/Intelligent Design. He writes: “What I discovered was a form of life that could not have evolved. In ability and life expectancy, it outpaces us. It is surprisingly intelligent and simply has no classifiable family tree.” 1

Of course he is talking about God. However, at the end he proposes that the real creation, or the one being designed, was God…for it is impossible for a deity this complex to occur of its own accord. So in essence, we are God; for only we can create His existence within our holy brain!  Now this goes hand in hand with the age old question: which came first- the chicken or the egg? Or that wonderful AC/DC song- Who made Who?

After reading his wonderful blog it really got me thinking about what I really believe? I finally came to the conclusion that I really do believe in Evolution! What a breakthrough!

Every living thing is in a process of evolution. Insects, animals, humans, societies, civilizations, nations, etc, etc…This concept cannot be denied. What also cannot be denied is that evolution does not always follow a straight-line. Mutations can either succeed or fail; humans, animals, and civilizations can also pass on and become extinct. In fact- evolution and degeneration often walk hand in hand. The same could be said for human behavior and spirituality. Humans can often devolve and act the part of the most dangerous animal, or they can evolve to be as wise and altruistic as Ashoka. Yes, unlike animals, we have the choice and the ability of higher thought processes and reasoning. (How did that happen?)

In my own personal process of Evolution it is my desire to know and be like God. Now because I could not easily relate or know God, He was kind enough to break into this world to give me a living example, in the form of Jesus Christ, to emulate. So when I took up my cross to follow/imitate Jesus, my physical, mental, and spiritual existence began its evolution towards a higher plane of existence. This process is ongoing, transcendent, and wonderful! It makes you see every living thing in a whole new way.

The truth is: life had to be created. It is just too irreducibly complex to have occurred on its own. Yes, I could be of the mindset that we are nothing but primates…but that seems like backward thinking to me…or De-evolution if you will. Yes, evolution is true…and Jesus Christ is the evolutionary pinnacle. 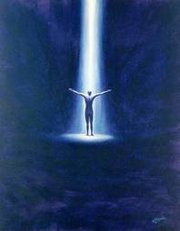 .
1 Taken from Psalms of the Secular Why Creation is a Fact